How To Play Checkers - Play With The Board Game or Play Online! 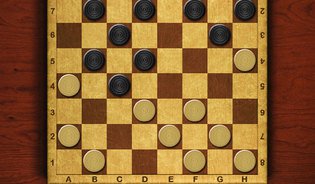 One of the first games that most people learn is how to play Checkers. Petes Game Room Forum believes it's such an easy game to pick up that anyone can learn to play it!

For those that are a bit rusty rulewise or for those looking to play Checkers for the first time, here is a quick rundown on the game & the rules. Even though this will be described in board game terms, one will easily be able to see how this translates when playing this no download game online. Let's get started!

The game is played by two people sat opposite each side of the Checkers playing board residing in between them, with the two players alternating moves.

One player controls the light coloured pieces and the other the darker pieces, with the board made up of dark and light squares, consecutively running across its surface.

The pieces are moved across the board diagonally and the player captures his opponents piece by "Jumping" over them, when there's an unoccupied space to land.

The Checkerboard is made up of an 8x8 square grid with alternating light and dark squares, creating it's checkered signature. There are a total of 32 light squares and 32 dark squares and depending what corner a player ends in, will be his ability to move or not move!

The pieces are cylindrical in shape, flat and usually made from wood. Similalry to online chess, the colors are white and red or black and there are two pieces called "men" pieces and "kings" pieces. The King piece can be picked out at a glance as its two same colored pieces, one on top on top of the other. 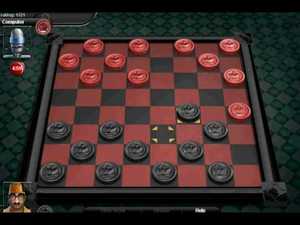 Each player starts with 12 pieces all placed on the first 3 rows' dark squares in front of them. The first row closest to each player is called "Kings Row". Each player moves one space diagonally into an empty space or "Jumps" diagonally over their opponent removing their piece or pieces from the game.

When the player reaches their opponents "Kings Row" they are "Crowned" with another piece, and are now a King who can move both forwards and backwards. To play Checkers and win, all the opponents players have to be captured, or his last player unable to legally move. This is a fun simple game to play, why not try it online today, fancy a game?